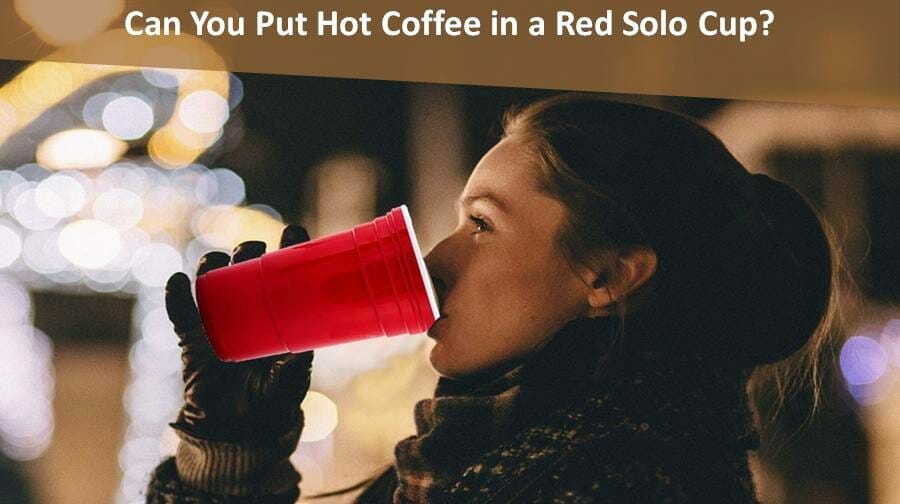 According to statistics, people around the world use 500 billion plastic cups per year for drinking beverages. Environmental scientists and health professionals are worried about the statistic because of the ecological disaster in the near future.

Plastic cups carry many detrimental substances that we take along with coffee during drinking. However, the positive thing is that people are conscious of the bad effects of plastic cups. So, they want to know whether it is alright to put hot coffee in a red solo cup.

Red solo cups contain harmful plastic particles that are dangerous for human health. So, staying away from these cups to drink hot coffee will be wise.

We will explain in this post why you should avoid a red solo cup and what you can use instead. Let’s go ahead.

Can You Put Hot Coffee in a Red Solo Cup?

The answer to this question is, it depends. If you ask about the traditional red solo cup, we would say NO.

Most of these cups are made of non-heat-resistant plastics. So when you pour hot coffee into it, the surface of the cup starts melting. Besides, it leaves harmful plastic additives in your drink. If you use solo cups constantly, it can damage your organs too.

Red solo cups are appropriate for cold drinks, not for hot coffee. They are also bad for the environment since they cannot be demolished quickly. But, at present, eco-friendly cups are available to drink hot beverages.

What Happens When You Use Red Solo Cups for Coffee?

As a coffee drinker, you need to know what happens when you pour hot coffee into a red solo cup. These cups are made of non-heat-resistant plastics like polystyrene or PVC. As a result, they get heated up when a hot beverage is poured into them. Sometimes, the surface of these cups also melts.

Though we cannot see the reaction, the deleterious plastic properties of solo cups directly get mixed in your coffee. If you drink coffee in these cups for a long while, you can experience various health issues, including hormonal imbalance, poor immunity, and even cancer.

Red solo cups don’t completely melt at the average temperature of hot coffee. But, it is not guaranteed that it will never melt. The plastics used in solo cups usually melt at 100° to 120 ° degrees Celsius.

So, if you pour too hot coffee into a solo cup, it can melt. Although it doesn’t happen in general, it will still release harmful and toxic additives in coffee.

Polystyrene and PVC are the two common plastics used to make solo cups. Unfortunately, both contain some dangerous particles for the human body.

Polystyrene carries some cancer-causing substances that can be leached into drinks. When hot liquid is put into a solo cup, the leaching process becomes accelerated.

PVC also contains deadly chemical additives such as lead, phthalates, and cadmium. They can get mixed with hot coffee too.

Undoubtedly, the additives of these two elements are poisonous. They can be dangerous for both human and animal health.

Why Should We Avoid HotCoffee in Solo Cups?

We have already mentioned some points that are enough to boycott plastic cups. They are extremely harmful to our health. Because of the regular usage of solo cups, people face many health difficulties, including metabolic disorders, infertility, hormonal imbalance, obesity, and even cancer.

Since plastic solo cups are disposable, they are buried in landfills or thrown into the ocean after usage. It is alarming that each plastic cup takes 450 to 1000 years to demolish. Besides, the toxic substances also get leached into the soil, which negatively affects the environment.

The only solution to overcome this disaster is not to use plastic cups at all.

The time has come to find an eco-friendly alternative to red solo cups. Traditional ceramic cups or stainless steel coffee cups are healthy alternatives if you want to avoid plastic solo cups entirely. Besides, the newly invented compostable coffee cups are great options instead of plastic cups.

Compostable cups are made of bioplastic that carries no harmful chemicals and substances. The manufacturing material of bioplastic is biological materials like corn. The cup takes less than two months to get demolished totally. It is eco-friendly and harmless for humans and animals.

Now we know how harmful the red solo cup is for our health. So, we should never use a plastic solo cup for drinking hot coffee. It also damages our environment and the animals in it.

They are designed for single use only. Hence, we have no option except to throw it into bins after use. As a result, huge plastic garbage is buried in landfills that take hundreds of years to decompose. Because of these reasons, the aware community is discouraging plastic solo cups for saving lives and the environment. We hope you got the answer to “can you put hot coffee in a red solo cup”.